This post describes my first experiments with using a homebrew upconverter to receive HF on an RTL-SDR dongle.

I encountered two major problems with this approach:

I decided to try an upconversion approach instead, where the entire HF band from 0-30 MHz is converted upwards by about 50 MHz, to lie between 50 and 80 MHz, which is then directly receivable by the device.

I built a simple 49.8-MHz Pierce oscillator roughly following the guidelines in http://www.rakon.com/component/docman/doc_download/234-single-transistor-crystal-oscillator-circuits. I used a 2N3904 transistor, which  is barely suitable in this application. The transition frequency (ft) of the 2N3904 is about 250 MHz, and generally ft should be 10x greater than the desired oscillation frequency of 50 MHz, so ideally we should use a transistor with an ft of 500 MHz.

Power for the oscillator comes from a USB port of a USB hub, which supplies 5 volts, though the document above shows oscillators designed for a 3-volt supply.

Due to the unknown crystal parameters, my use of a 5-volt instead of a 3-volt supply, and slight deviations in my design from the recommended component values, I have no idea exactly how much power this oscillator is capable of delivering. As the oscillator is intended to drive a diode-ring mixer, the oscillator should provide a 7 dBm signal into the mixer’s LO port.

I strongly suspected that this single-transistor oscillator would not provide enough LO drive to properly drive the mixer. Nevertheless, I proceeded to construct the rest of the upconverter circuit, assuming the circuit would work well enough for me to hear something.

Next I constructed the mixer. From my bag of about 100 1N4148 diodes, I selected a handful and picked 4 diodes that had roughly the same forward-voltage drop, as measured by a multimeter.

The 4 diodes were then twisted into a ring and soldered together. Two trifilar-wound baluns were also constructed, each wound on a FT50-43 core. A YouTube video by W2AEW clearly illustrates the process: https://www.youtube.com/watch?v=a8ViWS61hsU.

Putting it all together

Here is a close-up image of the completed diode ring mixer. 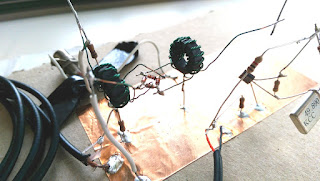 Here is a close-up image of the oscillator portion of the converter. This construction practice is rather poor for 50 MHz, with long component leads acting as antennas that both radiate the oscillator signal and pick up stray signals from the environment. However, because the oscillator circuit is probably not yet in its final form, I did not attempt to miniaturise it yet. 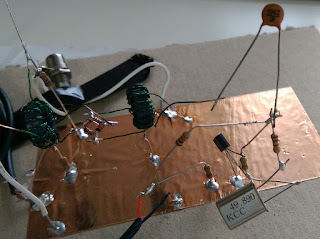 I then connected a random wire antenna (about 2.5 meters length) to the mixer’s RF input port and attempted reception using the gqrx program on Linux.

Encouragingly, the noise level did increase when the antenna was connected, implying that the mixer/oscillator were  at least working in some basic fashion. However, even with the LNA gain set to maximum, only one shortwave station was weakly audible around 6.9 MHz.

I then connected my broadband, active loop antenna (design by M0AYF, shown here: www.qsl.net/m0ayf/active-loop-receiving-antenna.html) to the RF input port. Then, with LNA gain set to about 50%, several shortwave stations were audible across the entire tuning range from 0-30 MHz. Setting the LNA gain too high caused many spurious signals to appear, which was immediately visible on the waterfall display as a sudden emergence of several spurious signals across the entire receiver bandwidth. Setting the LNA gain too low allowed no signal reception. In practice, setting the LNA gain was very easy — starting at 0, the gain is slowly increased until signal peaks and the noise floor from the active antenna become visible. After a certain gain setting, further increase in gain cause both the noise floor and the signals to increase. Gain should be backed off just before this point.

With the LNA gain set appropriately, it was possible to clearly listen to several shortwave broadcasts, and some amateur and maritime CW broadcasts.

However, it was not working perfectly:

The basic approach of upconversion works much better than direct sampling, due to reduced FM breakthrough, the ability to control LNA gain in software, and no need for dealing with small and critical wire placement inside the RTL-SDR device.
Sufficient LO drive must be ensured. LO drive could be measured with a simple RF probe, for example N5ESE’s design at n5ese.com/rfprobe1.htm .
A clean power supply should be used for the LO and for the active antenna. It is not yet clear if the USB-port-provided power is clean enough for LO usage.

More RF and IF filtering is needed. Adding more filtering necessarily reduces the input bandwidth (into the mixer) and the output bandwidth (from the mixer), and this limited bandwidth unfortunately reduces some of the appeal of the RTL-SDR devices, namely the ability to instantly tune anywhere within the shortwave spectrum, and the ability to record 2.5-MHz-wide ranges of the HF spectrum for later playback. Perhaps a compromise would be to create a 2.5-MHz-wide, sharp-cutoff RF bandpass filter (e.g. 5.5 MHz to 8 MHz) and IF bandpass filter (e.g. 55.5 MHz to 58 MHz). That would cut off many sources of interference/IMD, while still allowing instant tuning within the 2.5-MHz range, and also still allowing recording of the entire 2.5-MHz-wide slice of spectrum.

LO signal radiation (due to long leads) and/or LO signal leakage into the IF port (due to imperfect mixer balance) may be desensitizing the receiver. Again, IF filtering should help here.

This post describes an improved version of my homebrew, one-transistor RTL-SDR upconverter, including a circuit diagram and videos of the unit in operation.
It's only fair to share...