This autotuner have low profile and fit well in Chinese case for mcHF SDR radio.

For control the autotuner, the E3 encoder in you mcHF SDR radio must be with a button.

Chinese cases are usually equipped with such encoders. If you have an E3 encoder without a button, first replace it with an encoder of the same height with a button (encoder not included in DIY KIT)

You need to buy either:

It depends which shaft type is on the other encoders in your radio Both of them are 21.5 mm high (from PCB to end of shaft) and all with a switch You can download installation and operation manual by click here (v1.03 Oct 03, 2019)

After that, the LED will blink green for 2 seconds.

While the green LED is blinking, press the TUNE button of the transceiver.

The LED will turn orange and the autotuner will begin tuning.

When tuning is completed, the LED will turn red.

Release the E3 encoder button while the LD2 LED is lit continuously.

The LED will blink three times and the autotuner will switch to BY PASS mode.

Release the E3 encoder button while the LD2 LED is lit continuously.

The LED will flash once and BY PASS mode will be turned off.

All parts, using in this autotuner, are new and original.

E3 encoder with button not included in the DIY KIT.

Internal Autotuner for mcHF SDR Radio By Alexey UT0UM
https://www.mchf.at/
mcHF QRP Transceiver by Chris, M0NKA
http://www.m0nka.co.uk/
Installation by Sam, K9VPR
https://www.qrz.com/db/K9VPR
Thanks to Chris for the great mcHF, and Alexey for the fantastic tuner.

You can order mcHF AT DIY KIT here 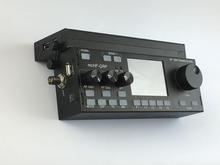