The mAT-180H provides automatic antenna tuning across the entire HF spectrum plus 6 meters, at power levels up to 120 watts. It will tune dipoles, verticals, Yagis, or virtually any coax-fed antenna. It will match an amazing range of antennas and impedances, far greater than some other tuners you may have considered, including the built-in tuners on many radios.

The mAT-180H has 16,000 frequency memories. When tuning on or near a previously tuned frequency, the mAT-180H uses “Memory Tune” to recall the previous tuning parameters in a fraction of a second. If no memorized settings are available, the tuner runs a full tuning cycle, storing the parameters for memory recall on subsequent tuning cycles on that frequency. In this manner, the mAT-180H “learns” as it is used, adapting to the bands and frequencies as it goes.

The ICOM 7300 has a built-in internal tuner, but its range is too small to fit my LW 49m in all the bands simply failed.I temporarily helped with the MFJ manual tuner, but for more serious work, setting it up was always laborious at the time of reworking.Even though I have labeled values ​​of the debugging elements for the frequencies used.It has to be fine to fine it every time.

That’s why, at the time I passed the exam, I started looking for something automatic.

For ICOM, I have found on eBay not yet a very familiar model from MAT-TUNER.

AN IMPORTANT WORD ABOUT POWER LEVELS
The mAT-180H is rated at 120 watts maximum power input at most. Many ham transmitters and transceivers, and virtually all amplifiers, output well over 120 watts. Power levels that significantly exceed specifications will definitely damage or destroy your mAT-180H. If your tuner fails during overload, it could also damage your transmitter or transceiver. Be sure to observe the specified power limitations.

Well, less than a week after receiving the license (very good timing), a package was waiting for me at the post office. Even though he traveled far, no signs of damage were seen.

In the solid protective foil lining was the tuner itself, the cable for connection to ICOM radio stations (AH3 or AH4 interface) and the manual.

As seen on the rear panel, LW can be connected directly (but the tuner does not contain any balun or unun, as it is sometimes used to be in the optional equipment of other tuners). Apparently, the wide range according to the specification will also work without it.

Of course, before I got involved and tried it, I was interested in technical design inside. That’s why I just cut him off:

As can be seen, it was classically necessary (as on most products in the Far East) to wash on the PCB soldering remnants that could cause problems over time.

But at the top of my head I stopped – and where are the mica capacitors? They are not. In this device, the designer decided to use the SMD. I do not know if this is the right decision, it will show up in practical use. As I have guessed in the specification of SMD capacitors, they are built to 50-63V. Anyway, I have measured their values ​​(those between the two relay lines). As I expected, their values ​​are from 10pF to 1nF roughly twice the previous value. I already have a similar advice for this one, this time for a voltage of 1kV.

After a visual inspection and back-loading, it was time for him to join the radio and the antenna.

I was suddenly surprised that only the internal tuner buzzed when the TUNE station was connected and turned on. Hmm. I turned off, set the power to about 10W and tried to press TUNE on the tuners. He buzzed, the SWR dropped to 1: 1.

I tuned in, TUNER shorter or longer (at higher frequencies like 28MHz, where the manual tuner did not help too much), eventually always tuned, max. I guess at 1: 2 …

Once again, nothing happened during the tuning process and the radio turned off. And then, until the total tuner, radio and source disconnection, the source was no longer switched on. Uff.

Fortunately, they responded to the protection, so it was time to find out why the tuner does not communicate with the radio and there was an outage.

So it was necessary to study AH4 communication, which is not too complicated.

On the Start pine, the radio detects a H (5V) level when switched on, and is informed that an external tuner is connected (and will not use an internal tuner).

KEY pine is a two-way communication, from the radio TUNE command, from Tuner Tune info.

First I tried to connect the power to pins 3 and 4 at the end of the connection cable (on the side where ICOM connects). And right – the power light on the tuner lights up, but the initial LED sequence has not been switched on. Even the collection was somewhat suspicious. So I measured directly on the DIN connector tuner, whether GND and POWER are correct. It looked good. It was then followed by the connection of the connection cable. And again measuring – AAAAA that’s what? GND was not connected with GND !!!

So the complete control of the connection cable followed and the cause was found. On the MOLEX side of the connector, everything corresponds to color. But inside the embedded DIN connector on the tuner side, PREVIOUS GND and KEY wires were !!! So at MOLEX I changed the pins, tried the tuner’s operation manually by connecting the signals.

After connecting the tuner to the radio, it all worked out just like it did. On the radio, just select the frequency, press TUNE and depending on whether the tuner is used or not at this frequency, from instant switching to maybe a few second tuning, the tuner is ready with the minimum broadcasting SWR.

I have no more experience working with the tuner than I have not worked for a few hours, I have not done more than writing an article … 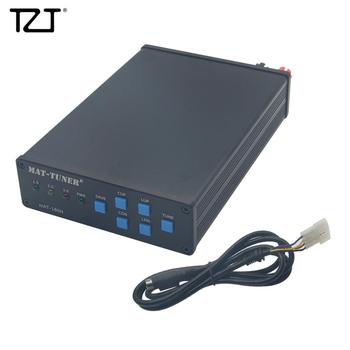 Which transmitters can use mAT-180H?